CAN Authors Have Much to Offer!

Your CAN authors are award winning, prolific, and sharing what’s on their hearts! Check out this weeks’ round up of good news and happenings in our writing community.

An Improper Proposal by Davalynn Spencer

New Release: No Safe Place by H. L. Wegley Releases May 21
Genre: Romantic Suspense
Publisher: Trinity Press International
ISBN-13:   978-0-9964937-6-5
About the book: A young man returning from the far country trying to regain his honor, and a young woman with a heart broken by her parents’ rejection because of her faith, each have what the other needs. But will the assassin who put them on his hit list give them enough time to discover what they have in each other?
No Safe Place, modern-day, prodigal story that races from the scenic beaches of the Olympic National Park to the beauty of Lake Chelan in Central Washington State, a story of courage, honor, faith, forgiveness, and love.
Preorder: https://amzn.to/2vchkea

About the Author:
H. L. Wegley served as an Air Force Intelligence Analyst and a Weather Officer. In civilian life, he worked as a research scientist, publishing in the scientific literature, then developed Boeing computing systems for twenty years before he and his wife retired near Seattle. He is an award-winning author of inspirational thrillers and high-action romantic-suspense novels.

Your CAN authors have good news to share as well as opportunities for readers to engage!

Vindicating the Vixens: Revisiting Sexualized, Vilified, and Marginalized Women of the Bible has been named a finalist in the adult non-fiction religion category of the Foreword INDIES Book of the Year Awards! The book is the brainchild of CAN member Dr. Sandra Glahn. INDIES recognize works by individual authors and independent publishing houses, including academic presses such as Stanford University.  More than 2,000 entries spread across 68 genres were submitted for consideration. The list of finalists was determined by Foreword’s editorial team. Winners are now being decided by a panel of judges across the country, reflecting Foreword’s readership of booksellers and librarians.  Winners in each genre—along with Editor’s Choice Prize winners and Foreword’s INDIE Publisher of the Year—will be announced June 15, 2018.

Heather L.L. FitzGerald is excited to share that The Genesis Tree, Book 3 of The Tethered World Chronicles, has been named as a finalist in the Realm Makers’ Realm Awards in the fantasy category! Realm Makers is committed to “help[ing] foster excellence in the speculative arts, whether fiction, film, illustrations, or whatever way we can imagine to tell our stories.” Winners will be announced at the annual Realm Makers’ conference in July.

April 20-21 – Becky Harling will be speaking at Midwest Bible Church in Chicago on How To Listen So People Will Talk.

April 27-29 and May 4-6 Becky Harling will be speaking at Word of Life Christian Conference Center on Who Do You Say That I Am?

is on pre-order for an April 27 release as Book 2 in the Front Range Brides collection.Various

purchase options can be found at http://davalynnspencer.com/books/an-unexpected-redemption/.

A Healing Heart is now in large print and audio!

A Healing Heart is now available in audiobook   and hard cover large print!

A Healing Heart by Angela Breidenbach

A workaholic woman must trust her business
to the one man who tried to destroy it when she suffers a heart attack. Mara Keegan is an uber-successful mother and a widow of
three years. She’s been chasing success and all the “good things in
life” for her family to make up for the cruel whim God played on them by
taking her husband. In an effort to be the perfect mom, she decides to
make a photo memory quilt, a graduation present for her daughter,
Cadence.
She’s not yet finished when she experiences a heart
attack. While Mara recuperates, she revisits the choices she’s made that
led to this physically and spiritually broken heart. The memory quilt
must be finished in time for Cadence’s big day, but Mara struggles with
her burgeoning feelings for the man who must keep Mara’s business going during her recovery, Joel Ryan. Can Joel find his way into Mara’s heart and onto Cadence’s quilt?

Angela Breidenbach is the president of the Christian Authors Network and the host of Lit Up, a radio show interviewing creative experts to help creatives have a more lucrative creative career. Always family friendly, always good for the heart.  http://www.AngelaBreidenbach.com

Listen to Lit Up on Apple Podcasts or https://toginet.com/shows/litup/ 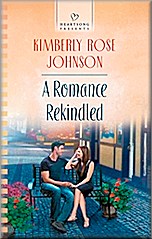 The small-town CPA can't forget how Blake jilted her and left without an explanation. But when her first love returns, the handsome writer evokes conflicting emotions.

Kimberly Rose Johnson is a member of ACFW and RWA and writes for Heartsong Presents. Her current series takes place in Leavenworth, WA., A charming Bavarian themed Village.