Tag Archives: End Of The Trail

End Of The Trail – A New Release 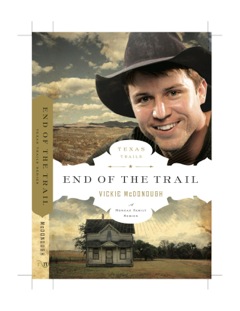 End of the Trail

End Of The Trail by Vickie McDonough, Susan Page Davis, and Darlene Franklin
About End of the Trail: Brooks Morgan is quick on the draw, but his weapon of choice is his smile. He’s smart and witty and has charmed his way through much of life, but now that he’s growing older—and a bit wiser—he wants to stop drifting and settle down. He sees his chance when he wins Raven Creek Ranch in a poker game, but when he goes to claim his prize, a pretty, young woman with a shotgun says the ranch belongs to her. Brooks isn’t leaving his one and only chance to make something of his life—but neither is she. Can they reach an agreement? Or will a greedy neighbor force a showdown, causing them both to lose they want most in life?
Vickie McDonough is an award-winning author. Her novel, Long Trail Home, was a finalist in the 2012 Booksellers’ Best Awards, and her books have won the Inspirational Reader’s Choice Contest, Texas Gold, the ACFW Noble Theme contest, and she has been a multi-year finalist in ACFW’s BOTY/Carol Awards. She is the author of the fun and feisty Texas Boardinghouse Brides series from Barbour Publishing and author of Long Trail Home and End of the Trail, books 3 & 6 in the Texas Trails series by Moody Publishers, in which she partners with Susan Page Davis and Darlene Franklin to write the series which spans 50 years of the Morgan family.