The Moses Quilt – A New Release 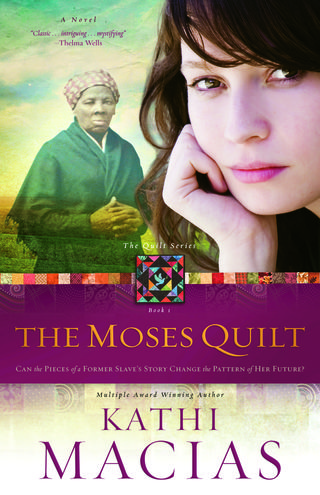 As if facing major decisions about the love of her life and
her future isn't enough, Mazie Hartford is also wrestling with a nagging
question about her family's past. And the answer seems connected to her
great-grandmother's Moses quilt. Can the patchwork pieces of a former slave's
story stitch the pattern of her tomorrow?

Kathi Macias is a multi-award winning writer who has
authored nearly 40 books and ghostwritten several others. A former newspaper
columnist and string reporter, Kathi has taught creative and business writing in
various venues and has been a guest on many radio and television programs. Kathi
is a popular speaker at churches, women’s clubs and retreats, and writers’
conferences. She won the 2008 Member of the Year award from AWSA (Advanced
Writers and Speakers Association) and was the 2011 Author of the Year from
BooksandAuthors.net. Her novel set in China, Red Ink, was named Golden
Scrolls 2011 Novel of the Year and was also a Carol Award Finalist; her October
2012 release, Unexpected Christmas Hero, was named 2012 Book of the Year
by BookandAuthors.net. Kathi “Easy Writer” Macias lives in Homeland, CA, with
her husband.

2 Thoughts on “The Moses Quilt – A New Release”