Remedy For The Heart – A New Release 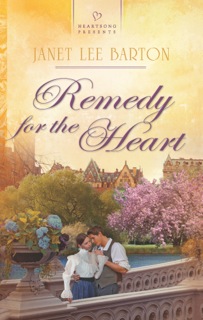 Remedy For The Heart by Janet Lee Barton

Even though she is thrilled to
begin her career as a pharmacist, Esther is well aware that not everyone is
willing to accept a woman in a man's field. But she is no stranger to adversity.
As an orphan, she knows it well. She just did not count on falling for Andrew
Radcliff, a man whose opinions are entirely opposed to her own.

Andrew, a young doctor struggling
to establish his own practice and reputation apart from his father, believes it
is God's will that he help those who cannot afford proper medical care. But he
is not so generous when he learns Esther Melrose's professional goals. Her place
is in the home…and in his heart. But marriage seems the furthest thing from
Esther's mind.

They are from two
different places in society. Do acceptance and love have a chance?
Janet Lee Barton was born in New Mexico and has lived
all over in Arkansas, Florida, Louisiana, Mississippi, Oklahoma and Texas. She
loves researching and writing historical romance. Janet and her husband now live
in Oklahoma where they feel blessed to live near one daughter and her family.
Janet loves researching and writing Christian fiction.
This new release information was uploaded by Cecelia Dowdy! Happy reading!

5 Thoughts on “Remedy For The Heart – A New Release”