Tips from the Pros: Stephanie Reed

Greetings from Sarah Sundin! Today I have the honor of interviewing historical fiction author Stephanie Reed – on her 32nd wedding anniversary! Congratulations on achieving such a wonderful milestone. 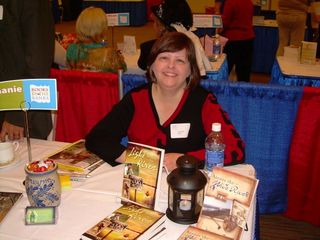 Stephanie, how did you get into writing? How many books do you have published?

Writing is what I always wanted to do. I have two books published by Kregel, Across the Wide River, and the sequel, The Light Across the River. The next book from Kregel will be The Bargain, with a sequel to follow.

How did you get your first book contract?

Kregel still accepted unsolicited manuscripts in those days, which helped me get my foot in the door, but clearly the Lord held the door open a crack.

What has helped you promote your books the most?

It’s always word of mouth. Book signings, radio interviews, magazine interviews, newspaper interviews, blog tours, book fairs, library talks, church talks, school talks, club talks – I’ve done them all. But that’s my mouth. People want to talk about their experiences. Sometimes something I’ve written reminds them of something they’ve experienced. How much time do you get at an event to make a connection? Mere seconds. That’s why I love Twitter. I like to go through the latest tweets and find someone who’s down and say something encouraging. Or I like to find something that makes me chuckle and give due props. I like to find something wondrous, like an upcoming meteor shower, and pass along viewing info. Rarely have I tweeted anything about my books, although my bio says I’m an author. If people are interested in what I have to say, they’ll check me out. Also I’ve left the matter of garnering Twitter followers up to the Lord. He’s faithful – he gave me an increase of over 1000 followers in a year.

What mistakes or wrong assumptions did you make with the marketing of your first book?

Actually I made a bigger mistake with my second book, thinking all the hard work I did for the first would carry over and pay off for the second. Didn’t happen. It will be hard to compare the third book to the first two, because the market is different. The first two were children’s/YA historical fiction about the Underground Railroad. The Bargain is Amish historical fiction.

I wouldn’t call it a gimmick, but I thought I had it made when I was invited to speak at a library two states over. My family faithfully accompanied me to a talk for three people – a mother and her daughters who happened into the library while I was speaking.

What’s the funniest thing that happened during a promotional activity?

I was invited to Books by the Banks in Cincinnati to promote my second book, The Light Across the River. The event was held at the Duke Energy Convention Center on the Ohio River, near where my main character had helped fugitive slaves escape. I had a lantern and a battery-operated tea light on my display table to reflect my title. Suddenly, the lights went out (funny in light of the venue, Duke Energy). Undeterred, I waved my lantern high in the darkness and got a big laugh.

I’d say that was perfect timing! Is there something else you did that really helped with marketing your books?

For Across the Wide River, I spent weeks contacting public libraries across the country by email and requested that they purchase my book, and many did. Libraries buy multiple copies! I worked in public libraries for several years and I’ve been a lifelong enthusiastic patron.

Did you see God open any doors in the promotion of your books?

My mom is a big fan, and she’s very strong in her faith. After I’d tried unsuccessfully to schedule a signing at my hometown independent bookstore. Mom talked to the manager without my knowing and they rolled out the red carpet for me. It was my biggest talk or signing ever. Thanks, Mom (and God).

Your mom is fabulous publicist! (Mine is too.) Stephanie, now that you’ve been writing a while, what do you find works best for you in promoting your work?

Low-key is my style. I so appreciate CAN, this network of Christian authors that takes me by the hand and gently leads me to new opportunities. You guys are great!

What are your top tips for writers with their first book contract?

Don’t rest on your laurels. Avail yourself of networks like Twitter, find your comfort zone, and pray. I’ll have to keep you posted on how it all pans out for The Bargain. My best tip? Write a great book.

Thank you so much for visiting with us today on your anniversary!

One Thought on “Tips from the Pros: Stephanie Reed”